Welcome to my new blog feature: Anxious Encounters with Humankind. This is where I talk about my introvert as fuck self venturing out in public, doing things in close proximity to humans.

My recent adventure took me to Barnes & Noble where Ellen Hopkins, one of my favorite authors, was signing books and promoting her recent publication: The You I’ve Never Known. My mom heard her speak at an event in Billings, Montana way back in 2015 and has been trying to convince me to get to one of her events ever since. I went to my very first author event just last year where I had the opportunity to meet Richard Kadrey and I got to hear Stephen King speak a few months later. One of my bookish/bloggy goals for this year was to crawl out of my shell a little bit more and get out and experience the (albeit few and far between) events that my little town of Reno has to offer.

With my best friend Dani towing me along, I brought my copy of Tilt in hopes of getting it signed. I also set off in hopes of finding a copy of Triangles to purchase and get signed. I was successful and by that time she had arrived. So, you know, I had a minor meltdown as you do when you’re about to meet someone you admire and are expected to formulate sentences. Dani walked around with me for almost an hour before I finally worked up the nerve to walk up to her table.

I introduced myself very loudly. Then I rambled a bit, complimented her on the unexpected twist in her new book, and then officially ran out of words. That’s when Dani came to the rescue and it was slightly easier to maintain a conversation except that’s also when I started sweating and my glasses literally fogged up. Being an introvert in public is fucking awesome.

I told Ellen how Triangles was one of the very first ARCs I received and reviewed on my blog, back when it was still Sweet Tidbits, and I asked her if she had any plans of doing more adult verse novels (the only other of hers being Collateral.) She said, unfortunately, there isn’t much of a market for that writing style in that age group so most likely not. We talked about the two anthologies she’s a part of which are both releasing this September: Behind the Song and Feral Youth. She sounded very excited about being a part of an anthology that represented all kinds of women. There’s another upcoming publication she discussed which delves into gun violence and how she switched up the point of view to omniscient from her typical 1st person. The last publication discussed was the sequel to her 2015 adult novel, Love Lies Beneath, and how she’s currently dealing with editor problems because it’s her first book that has ever reached the fourth stage in revisions. I didn’t confirm with her, however, the current release date for the as yet Untitled sequel is August 2018.

I’m extremely grateful to Barnes & Noble for hosting this event and giving me the opportunity to meet such an amazing author. And much thanks to Ellen for signing my two books which I will be able to cherish forever. 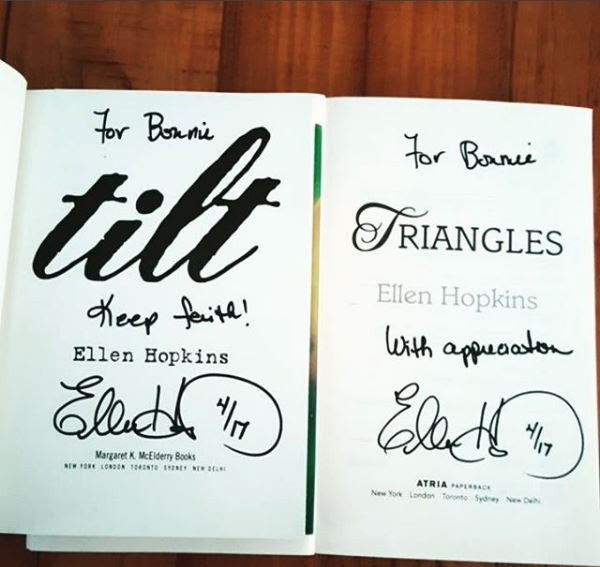