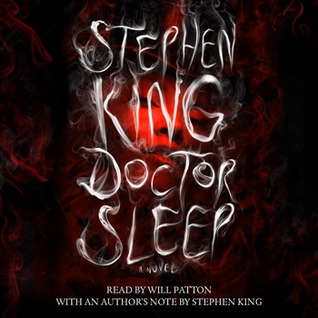 Stephen King returns to the characters and territory of one of his most popular novels ever, The Shining, in this instantly riveting novel about the now middle-aged Dan Torrance (the boy protagonist of The Shining) and the very special twelve-year-old girl he must save from a tribe of murderous paranormals.

On highways across America, a tribe of people called The True Knot travel in search of sustenance. They look harmless—mostly old, lots of polyester, and married to their RVs. But as Dan Torrance knows, and spunky twelve-year-old Abra Stone learns, The True Knot are quasi-immortal, living off the “steam” that children with the “shining” produce when they are slowly tortured to death.

Haunted by the inhabitants of the Overlook Hotel where he spent one horrific childhood year, Dan has been drifting for decades, desperate to shed his father’s legacy of despair, alcoholism, and violence. Finally, he settles in a New Hampshire town, an AA community that sustains him, and a job at a nursing home where his remnant “shining” power provides the crucial final comfort to the dying. Aided by a prescient cat, he becomes “Doctor Sleep.”

Then Dan meets the evanescent Abra Stone, and it is her spectacular gift, the brightest shining ever seen, that reignites Dan’s own demons and summons him to a battle for Abra’s soul and survival. This is an epic war between good and evil, a gory, glorious story that will thrill the millions of devoted readers of The Shining and satisfy anyone new to the territory of this icon in the King canon.

I’m a total Stephen King newbie, so when I first decided to dive into his book of works I started at the very beginning with Carrie and was an immediate fan. Next up was Salem’s Lot and then finally The Shining which became an instant favorite. His books in print already have that creepy effect that manages to latch on to your insides, but listening to the audiobook really took the terror to the next level for me. Since it was a recent read, I was fairly shocked to hear about a sequel coming out especially when you consider The Shining was originally released in 1977. Albeit, I was on board and full of anticipation.

Doctor Sleep picks up shortly after The Shining’s explosive (literally) ending with Danny and his mother residing in warm and sunny Florida desperately trying to overcome the trauma they endured in Colorado. Danny is still haunted by the rotting corpse-like ghosts of the Overlook and essentially compels him to enlist the help of Dick Hallorann, the chef from the Overlook. He gives him the only knowledge he has of controlling his psychic gifts, but Danny’s has always been strong so it only does so much.

The book flashes forward in time to feature a middle-aged Dan Torrance who has followed the path of his father and is an alcoholic for the sole reason that it dulls the shine. An incident causes him to hit a rock bottom of sorts and we flash forward again by three years to find Dan working at a hospice, using  his gifts to aid patients in the transition between life and death. They call him Doctor Sleep.

Next, we’re introduced to Abra Stone, a young girl who’s psychic abilities make Dan’s look like a parlor trick. We’re also introduced to a group of individuals that go by the name of the True Knot who travel the country in RV’s searching out children with gifts like Abra’s. They torture and kill the children so as to fully harvest the ‘steam’ that escapes their bodies upon their deaths. Abra is the strongest child they’ve yet encountered and she’s next on their list.

Phew. That summary may have been long, but so was the book itself and had far more pages than was actually required. The middle lagged and the build-up to the ‘epic’ showdown between good and evil was fairly unsurprising. As highly anticipated as Doctor Sleep was for me, I can’t help but feel in the end that leaving The Shining as a stand-alone would have been far wiser.

What worked well for The Shining was the true horror aspects. The isolation of The Overlook, the claustrophobic effects of the encompassing storm and the transformation of a loved one into a terrifying monster. (The rotting corpse in the bathtub definitely helped as well.) Doctor Sleep leans more towards the supernatural and fantasy aspects making it less real and giving it a very fabricated feel. I greatly disliked the vast array of pop culture references strewn throughout the novel. They served no obvious purpose and should have been edited out. Game of Thrones, Twilight, Sons of Anarchy and Hunger Games were among the few I caught. I did enjoy the references to characters from his son Joe Hill’s novel NOS4A2 though.

While I was clearly left unimpressed, there were a few facets that I really enjoyed. I absolutely loved the beginning; it not only held promise but felt like a true sequel to The Shining. (The rest of the story veered a bit too far off track for my liking.) I loved the inclusion of Halloran and how we got to see the events following The Overlook without immediately jumping to Danny being middle-aged. It was fantastic to see the effects of The Overlook on Danny and how he grew up to be (and the almost inevitable fact that him and his Father ultimately took the same path). Tony also plays a part in the story as well as the original site of the Overlook is included. It was fantastic and I loved returning to those aspects of its predecessor, at least until the story took a side street into Strangeville.

Despite my issues with the book as a whole, the beginning bits were totally worth it. I listened to this on audio and narrator Will Patton did a fantastic job. Listen to a clip below to see for yourself.