Also by this author: The Night Eternal, Trollhunters

An epic battle for survival begins between man and vampire in The Strain—the first book in a heart-stopping trilogy from one of Hollywood’s most inventive storytellers and a critically acclaimed thriller writer. Guillermo del Toro, the genius director of the Academy Award-winning Pan’s Labyrinth and Hellboy, and Hammett Award-winning author Chuck Hogan have joined forces to boldly reinvent the vampire novel. Brilliant, blood-chilling, and unputdownable, The Strain is a nightmare of the first order.

The Strain is a new series by Guillermo del Toro and Chuck Hogan. This book had a really great concept and it was quite original. The summary itself spooked me…

‘A Boeing 777 arrives at JFK and is on its way across the tarmac, when it suddenly stops dead. All window shades are pulled down. All lights are out. All communication channels have gone quiet. Crews on the ground are lost for answers, but an alert goes out to the CDC. Dr. Eph Goodweather, head of their Canary project, a rapid-response team that investigates biological threats, gets the call and boards the plane. What he finds makes his blood run cold.’

…and it certainly didn’t stop there. This is not your average romanced vampire novel. This was a very exciting, fast paced, nail biter, edge of your seat kinda book. Not a recommendation before bedtime.

My one main issue that dropped this novel from 4/5 stars down to 3 was the writing style… it read to me more like a screenplay where nothing was really explained, like it would be better left to an actor acting out a script. I had a hard time connecting with the characters for this reason. This was overall a highly enjoyable novel regardless of my 3 star rating and I will definitely be continuing this series in the future. 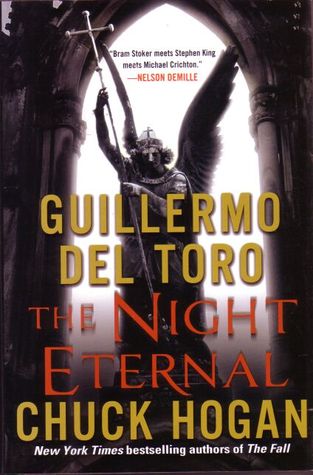