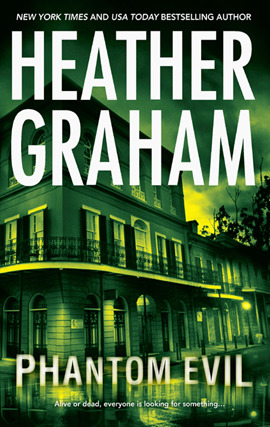 A secret government unit, a group of renegade paranormal investigators…and a murder no one else can crack

Though haunted by the recent deaths of two teammates, Jackson Crow knows that the living commit the most heinous crimes.

A police officer utilizing her paranormal intuition, Angela Hawkins already has her hands full of mystery and bloodshed.

But one assignment calls to them too strongly to resist. In a historic mansion in New Orleans's French Quarter, a senator's wife falls to her death. Most think she jumped; some say she was pushed. And yet others believe she was beckoned by the ghostly spirits inhabiting the house—once the site of a serial killer's grisly work.

In this seemingly unsolvable case, only one thing is certain: whether supernatural or all too human, crimes of passion will cast Jackson and Angela into danger of losing their lives…and their immortal souls.

Phantom Evil is the first in a new series by Heather Graham; the Krewe of Hunters. When the Louisiana state Senator’s wife is found dead after an apparent suicide, her husband requests a closer investigation of sorts when he suspects that ghosts were involved in her death. Jackson Crow heads the paranormal investigation team which consists of him and 6 other members who each have their own psychic abilities. The investigation seems to show that the Senators wife didn’t in fact kill herself but whether or not ghosts were the reason for her death have yet to be established.

The best part about this book was the overall character development. I first had a feeling that by having such a large number of new characters in an introductory novel that you’d either lose track of who’s who or learn more about some and the others simply fall off the map. Heather Graham did a great job at keeping all the characters straight and making them all a valued part of the story.

The storyline regarding the ghosts was what initially interested me in the book. As for it being my favorite ghost story it was not; however, it was interesting and even sometimes a tad bit scary! This is an enjoyable read for anyone interested in ghost stories or mystery type thrillers. I enjoyed the blending of the different genres, even with the added dash of romance thrown in; the author didn’t make it seem like overkill. Predictable, yes, but still nonetheless enjoyable. I’ll definitely be willing to invest more into this series.