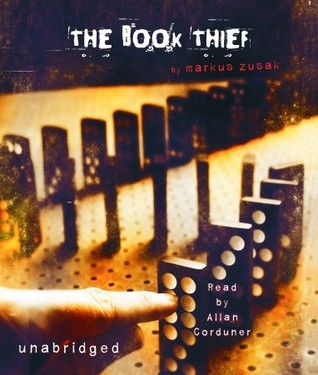 The extraordinary #1 New York Times bestseller that will be in movie theaters on November 15, 2013, Markus Zusak's unforgettable story is about the ability of books to feed the soul.

It is 1939. Nazi Germany. The country is holding its breath. Death has never been busier, and will become busier still.

Liesel Meminger is a foster girl living outside of Munich, who scratches out a meager existence for herself by stealing when she encounters something she can’t resist–books. With the help of her accordion-playing foster father, she learns to read and shares her stolen books with her neighbors during bombing raids as well as with the Jewish man hidden in her basement.

In superbly crafted writing that burns with intensity, award-winning author Markus Zusak, author of I Am the Messenger, has given us one of the most enduring stories of our time.

The Book Thief tells the tale of Liesel Meminger, a girl who loses one family only to gain another. How she becomes dubbed The Book Thief. How she slowly gains an understanding of Germany and the Nazis and the wrongness of it all. How her family comes to hide a Jewish man, Max, in their basement despite all risks. And how Max transformed her life completely and defined her in a whole new light. It’s a tale of sorrow and joy, of friendship and love, of bravery and acceptance.

‘I witness the ones that are left behind, crumbled among the jigsaw puzzles of realization, despair, and surprise. They have punctured hearts. They have beaten lungs.’

The Book Thief’s use of Death as the narrator is not only thoroughly alluring in concept alone but it serves to utilizes dark humor to lighten the saddest of situations. Death is not the cold and emotionless specter you would expect him to be though. He’s unintentionally humorous, and has a fascination for humans despite his awareness of his need to remain impartial. He seeks meaning in his work and becomes mesmerized by the interesting and courageous humans, Liesel being one of them.

“…to prove to myself that you, and your human existence, are worth it.”

The symbolism is rife within these pages. Most importantly is Liesel and her book thieving. She remains blissfully naive of what is truly going on in the world until April 20, 1940 when a book burning was organized in the town square to celebrate Hitler’s birthday. She discovers things that greatly impact her and change her outlook on what has happened in her life up till that point and swiftly regards Hitler as her enemy. She steals a book from the pyre to mark the occasion. The book thieving continued after that but it wasn’t just a bad childish habit, it became a symbol for her resistance to the Nazi regime and specifically to Hitler and all he had done. Each book stolen became a symbol of hope for a better future in the post-Holocaust world.

I’ve only recently become drawn to stories of war, the majority of those I’ve read have been based around WWII, and The Book Thief is absolutely one of the very best. I loved that it was told from the point of view of a German sympathetic to the Jews which made it immediately different than any of the others I had read. Possessing richly drawn characters is what makes this story absolutely unforgettable. Liesel and Rudy, Hans and Rosa, and of course Max…their cumulative story will forever live on in my mind.

The Book Thief is an emotional tale regarding the power of words and how that power can be used for good or bad, depending on how you choose to use them.

Last quick note… It must be said that I initially started reading this in print form and while it’s still a beautiful tale, it really shined through audio. The narrator is fantastic and does an excellent Death. See for yourself in this clip.