Also by this author: The Son of Neptune

The formerly glorious god Apollo, cast down to earth in punishment by Zeus, is now an awkward mortal teenager named Lester Papadopoulos. In order to regain his place on Mount Olympus, Lester must restore five Oracles that have gone dark. But he has to achieve this impossible task without having any godly powers and while being duty-bound to a confounding young daughter of Demeter named Meg. Thanks a lot, Dad.

With the help of some demigod friends, Lester managed to survive his first two trials, one at Camp Half-Blood, and one in Indianapolis, where Meg received the Dark Prophecy. The words she uttered while seated on the Throne of Memory revealed that an evil triumvirate of Roman emperors plans to attack Camp Jupiter. While Leo flies ahead on Festus to warn the Roman camp, Lester and Meg must go through the Labyrinth to find the third emperor—and an Oracle who speaks in word puzzles—somewhere in the American Southwest. There is one glimmer of hope in the gloom-filled prophecy: The cloven guide alone the way does know. They will have a satyr companion, and Meg knows just who to call upon. . . .

Rick Riordan is the #1 New York Times bestselling author of over twenty novels for young readers, including the Percy Jackson series, the Kane Chronicles, the Magnus Chase series and the Trials of Apollo. He is also the author of the multi-award-winning Tres Navarre mystery series for adults.

For fifteen years, Rick taught English and history at public and private middle schools in the San Francisco Bay Area and in Texas. While teaching in San Antonio, Saint Mary’s Hall honored him with the school’s first Master Teacher Award.

While teaching full time, Riordan began writing mystery novels for grownups. His Tres Navarre series went on to win the top three national awards in the mystery genre – the Edgar, the Anthony and the Shamus. Riordan turned to children’s fiction when he started The Lightning Thief as a bedtime story for his oldest son.

Today, eighty-six million copies of his books are in print in the United States, and rights have been sold into more than 37 countries.

Rick Riordan now writes full-time. He lives in Boston with his wife and two sons.

I’ve only just started reading The Dark Prophecy but I already know I’m going to need this one like air.

Also by this author: The Nightmare Affair

Sixteen-year-old Dusty Everhart breaks into houses late at night, but not because she’s a criminal. No, she’s a Nightmare.

Being the only Nightmare at Arkwell Academy, a boarding school for magickind, and living in the shadow of her mother’s infamy, is hard enough. But when Dusty sneaks into Eli Booker’s house, things get a whole lot more complicated. He’s hot, which means sitting on his chest and invading his dreams couldn’t get much more embarrassing. But it does. Eli is dreaming of a murder.

Now Dusty has to follow the clues—both within Eli’s dreams and out of them—to stop the killer before more people turn up dead. And before the killer learns what she’s up to and marks her as the next target.

Today is my stop on ‘The Nightmare Affair’ blog tour hosted by Shane @ Itching for Books! I’m featuring a guest post from Mindee where she talks about how she came up with such an original premise and last but not least there’s a giveaway (and it’s signed!!)

‘Genesis of The Nightmare Affair ‘

Hey there! I’m so happy to be guest blogging here today at Sweet Tidbits about the genesis of The Nightmare Affair.

I suppose in reality, the very first spark for the idea came from an anthology of short stories called, Horse Fantastic. Published around the time I was in the sixth or seventh grade, I picked it up because (1) it was about horses (Best. Thing. Ever. in other words) and (2) it contained short stories by both Jennifer Roberson and Mercedes Lackey, two of my favorite fantasy authors. 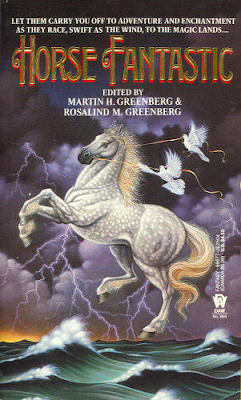 Jennifer Roberson’s story is called “Riding the Nightmare,” and it’s a weird, scary little story about a rodeo cowboy and a black bronc called—you guessed it—Nightmare. Of course, the bronc is no ordinary horse, but a front (or channel or tool, the story doesn’t make it clear) for the nightmare of myth and legend, a succubus who makes a very brief appearance.

Although artfully written, I didn’t care much for the story. The rodeo holds little romance for me. I’m way more interested in riding horses and building relationships with them than that macho-stupid cowboy crap. Still, the nightmare of that story left a lasting mark on my subconscious.

A decade or so later, sometime around 2009, as I sat down at my desk to brainstorm short story ideas, I found myself thinking about Roberson’s story once more. At the time I was searching for a new monster to play the part of villain. I had just attempted a story about a Wendigo that wasn’t as successful as I’d hoped. I needed a replacement. So why not a Nightmare like the kind in that short story I’d read as a kid?

I immediately jumped on Wikipedia, and soon stumbled across John Henry Fuseli’s painting The Nightmare. 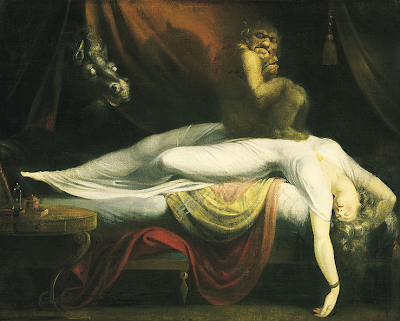 Naturally, my interest in the painting first centered on the horse, “the mare,” which you don’t even notice right away. But gradually my creative brain began to focus on the demon in the picture, the true “nightmare.” I’m not sure how it happened, but I started wondering what it would be like if the demon were a girl instead, someone more or less human, more or less ordinary, but cursed to spend her nights sitting on people’s chests. I imagined it would be pretty sucky, but also pretty funny, too.

And just like that my search for a monster to play a villain in a short horror story became the protagonist of a novel.

Not long after, I sat down and wrote the opening scene where a twenty-something college student named Dusty—yes, this was her name from day one—breaks into a house to “dreamfeed” on a stranger who turns out to be a hot guy, and who wakes up while she’s in the process of sitting on his naked chest. Shenanigans and chaos ensued.

But when I got to the end of that opening scene, the story abruptly died from “I have no idea what happens next” disease, and I set it aside and wrote a completely different novel, one that would now be regarded as New Adult. Fast forward about a year, once I’d finished the New Adult novel and unsuccessfully queried it, I returned to my little idea about Nightmares.

I approached it this time with a weird mixture of fear and determination. I was a little heartbroken over my lack of success with the New Adult, which, while a decent enough story, didn’t really have a place in the market. I’d come to understand that stories with college-aged protagonists that weren’t quite “adult” were a hard sell. And this is when something fundamental changed for my story and for me as a writer. I asked myself, what if Dusty were a teenager?

It was as if someone had turned on the most powerful light switch in the world, one that completely opened my eyes to something new. Although I liked young adult and children’s stories, I had never considered writing one myself. But once I got turned onto the possibility, all of these ideas began to fill my head—about Dusty and her friends, and her school for other magical creatures like herself, and for Eli, the elusive boy we meet in that opening scene.

To give you an idea of what I mean, here is a sample from one of my early brainstorming sessions, complete with doodling (fifty points if any of you can actually read this mess—even I can’t read all of it): 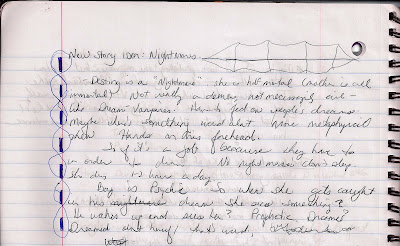 After many longs days, and a lot of hard work, and hard thinking, this mess of ideas became The Nightmare Affair. A couple of months later, it caught the eye of my rock star agent, and sold to Tor Teen in a little over two weeks.

I’m not entirely sure what the moral to this story is or if there even is one. But thank goodness I read “Riding the Nightmare” all those years before. And thank goodness all those agents rejected that New Adult. Otherwise, I might not ever have arrived at this moment, with a book about to make its way into the world, and right where I always wanted to be.

Two signed copies will be available for giveaway and it’s open to International readers!!

I’d like to thank Mindee for taking the time to guest post for me, I love the concept for this story and loved even more reading about the entire process! So what do you guys think?