In this spectacular father-son collaboration, Stephen King and Owen King tell the highest of high-stakes stories: what might happen if women disappeared from the world of men?

In a future so real and near it might be now, something happens when women go to sleep; they become shrouded in a cocoon-like gauze. If they are awakened, if the gauze wrapping their bodies is disturbed or violated, the women become feral and spectacularly violent; and while they sleep they go to another place. The men of our world are abandoned, left to their increasingly primal devices. One woman, however, the mysterious Evie, is immune to the blessing or curse of the sleeping disease. Is Evie a medical anomaly to be studied, or is she a demon who must be slain? Set in a small Appalachian town whose primary employer is a women’s prison, Sleeping Beauties is wildly provocative and gloriously absorbing.

“The elms made him think of brothers, of sisters, of husbands and wives—he was sure that, beneath the ground, their roots were mortally entwined.”

What would happen to the world if all the women fell asleep?

In rural Appalachia, the Aurora Sleeping Sickness only affects individuals with the XX chromosome. When women drift off to sleep they begin growing tendrils of webbing that cocoon their bodies completely and while they remain alive in this world they wake up in a different one entirely. In this world though, there’s one single woman named Eve Black that remains able to still sleep and wake up but she possesses mysterious powers and seems to be the reason why all other women are in the state they’re in.

This started off so incredibly fascinating and reminded me strongly of The Stand with this mysterious sickness slowly infecting the world. The Aurora Sleeping Sickness was chilling in its descriptions, affecting only women and the reverberations throughout the community that results from their absence was brilliant and no doubt made any woman reader leary about putting the book down and going to sleep. I especially loved the inclusion regarding the “Mother’s Instinct” described as such:

‘This phenomenon proved to be one of the most curious and most analyzed enigmas of Aurora – the so-called “Mother’s Instinct” or “Foster Reflex.” While reports of violent interactions between sleepers and other adults ultimately numbered in the millions, and unreported interactions millions more, few if any occurrences of aggression between a sleeper and her pre-adolescent child were ever confirmed. Sleepers handed over their male infants and toddlers to the closest person they could find, or simply put them out of doors. They then returned to their places of slumber.’

The story starts off unhurriedly as the authors build up the intensity but it ended up being my favorite part of the story (aside from the narration itself; Marin Ireland knocked this one out of the park. 5 stars.) The slow, steady pace building up this world where such a thing could possibly occur was all necessary to make this as credible as it could be. The most problematic bit was the vast array of characters that we were expected to keep track of. When reading stories that include far too many characters to keep straight, I’ll occasionally write myself little bullet point lists or draw family trees just to keep things straight. If I had even attempted something like that with this story my desk (and myself) would have ended up looking something like this: 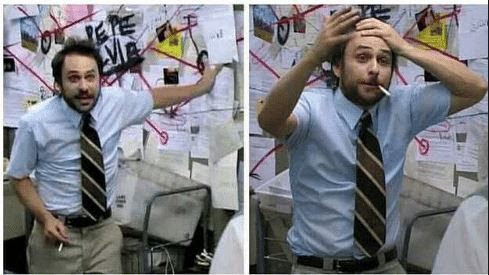 One of the main female characters, Lila, resulted in some great passages from her point of view. Ironically though, her husband Clint ends up taking over as the main act in the final half of the book. Not only does he take over as the main character but he ends up playing an important role in the vast scheme of things and wait, wasn’t this supposed to be about the females? How come a dude once again gets to take center stage? I had worried about this possibility before I even picked this one up, but alas, the book is definitely less about what would happen to the females and more about what would happen to the men. They resort to violence and guns and explosions and everything in between, surprising no one. The authors also seem to miss making any solid point regarding why this happened and what was learned from the experience. Suffice it to say, the descriptions of the sickness and the infected were eerie and great to read but when it came down to breaking any gender stereotypes there’s certainly nothing new here.