Series: Gone With the Respiration 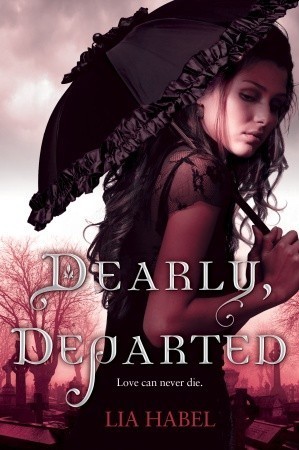 A classic romance, suspense thriller, rip-roaring adventure, and macabre comedy all at once, Dearly, Departed redefines the concept of undying love.

CAN A PROPER YOUNG VICTORIAN LADY FIND TRUE LOVE IN THE ARMS OF A DASHING ZOMBIE?

The year is 2195. The place is New Victoria—a high-tech nation modeled on the mores of an antique era. Sixteen-year-old Nora Dearly is far more interested in her country’s political unrest than in silly debutante balls. But the death of her beloved parents leaves Nora at the mercy of a social-climbing aunt who plans to marry off her niece for money. To Nora, no fate could be more horrible—until she’s nearly kidnapped by an army of walking corpses. Now she’s suddenly gunning down ravenous zombies alongside mysterious black-clad commandos and confronting a fatal virus that raises the dead. Then Nora meets Bram Griswold, a young soldier who is brave, handsome, noble . . . and thoroughly deceased. But like the rest of his special undead unit, Bram has been enabled by luck and modern science to hold on to his mind, his manners, and his body parts. And when his bond of trust with Nora turns to tenderness, there’s no turning back. Eventually, they know, the disease will win, separating the star-crossed lovers forever. But until then, beating or not, their hearts will have what they desire.

Dearly, Departed was quite enjoyable for me … at first. I found myself overwhelmed by the storyline because it had entirely way too much going on. I picked this up solely because it was a zombie novel (gotta love zombies) but then I was thrown into this odd dystopian society and THEN it transformed into this weird steampunk society where everything is set in ‘Victorian’ times. That was all just a bit too much for me and made it quite unbelievable and entirely too hard to follow. Suffice it to say I’m going to skip my typical summarizing of the story because it’s simply entirely way too much to summarize.

I found each and every one of them to be an enjoyable addition to the story, but the multiple change in point of view added to the ‘entirely-too-hard-to-follow-ness’ that was going on for me. I thought it was an interesting touch when one of the POV’s was even the ‘villain’, but it didn’t work for me overall.
Bram was my favorite… he was charming, interesting, and quite funny. You could almost forget that he was a zombie.

’I gave her as long as she needed, all the while mentally designing my tombstone. R.I.P., Captain Abraham R. Griswold. He was completely useless and made girls cry.’

I think that was a part of the problem though… I didn’t want to forget he was a zombie! Zombies aren’t supposed to be mistaken for humans! I think I was missing the overall zombie-ness about him.

The zombie’s in ‘Dearly, Departed’ were an odd bunch. They were all infected with what is known as the Lazarus syndrome which caused people to come alive a few short hours after being pronounced dead… but they didn’t all come back the same. We had the Gray’s who are your typically moaning, limb dragging zombie-types. Then there’s a zombie army that fights the Gray’s. The members of the zombie army are zombies but they stayed fairly human, as far as personalities go… they still looked just as gruesome as normal zombies.

’I desperately wanted to roll my eyes, but we were discouraged from doing so. The muscles around the eyes are always some of the first to go.’

Well shucks. I was so hoping to like this more but unfortunately this really didn’t work for me.