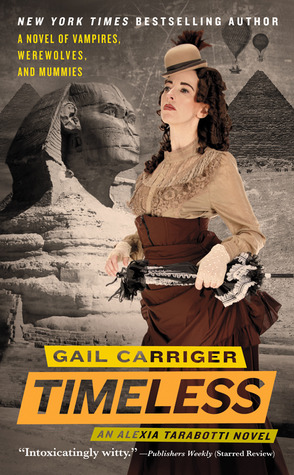 Also by this author: Prudence

Alexia Tarabotti, Lady Maccon, has settled into domestic bliss. Of course, being Alexia, such bliss involves integrating werewolves into London High society, living in a vampire's second best closet, and coping with a precocious toddler who is prone to turning supernatural willy-nilly. Even Ivy Tunstell's acting troupe's latest play, disastrous to say the least, cannot put a damper on Alexia's enjoyment of her new London lifestyle.

Until, that is, she receives a summons from Alexandria that cannot be ignored. With husband, child, and Tunstells in tow, Alexia boards a steamer to cross the Mediterranean. But Egypt may hold more mysteries than even the indomitable Lady Maccon can handle. What does the vampire Queen of the Alexandria Hive really want from her? Why is the God-Breaker Plague suddenly expanding? And how has Ivy Tunstell suddenly become the most popular actress in all the British Empire?

Timeless, the fifth and last installment in the Parasol Protectorate. And the final adieu to Alexia, Conall, Ivy, and all the other colorful characters we’ve grown to know and love. This was actually my favorite installment out of the entire series surprisingly enough. Usually I don’t care for when a series that I’m quite fond of ends; however, it was done so well and was so much fun that I was sold. If you haven’t picked up this series yet and are looking for something incredibly original this is it.

Timeless opens several years after Heartless with Alexia and Conall’s daughter Prudence having been adopted by Lord Akeldama in order to guarantee the safety of the entire family. Prudence had me laughing out loud on several occasions as she was such a handful but such a wonderful addition to the story. The entire family travels to Egypt when the God breaker Plague becomes an issue once again as it has started expanding at an alarming rate.

With Alexia and the family in Egypt, Lyall and Biffy are left behind in London so there are POV shifts between the two locations. I can understand the need for this in retrospect but at the time I couldn’t help feeling it took something away from the story, especially with the focus on the budding relationship between Lyall and Biffy. All in all though? Extremely well done and truly enjoyable. Hands down my favorite steampunk book/series I’ve ever read.

Sound interesting? Here’s your opportunity to win a paperback copy!