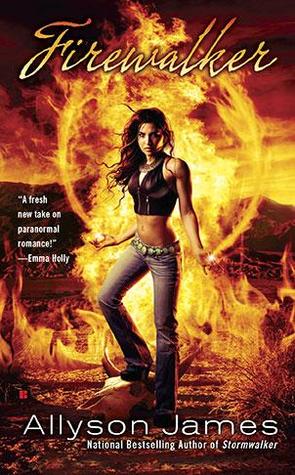 Mick must face the dragon council for breaking their laws, and while he doesn't seem too worried about his upcoming trial, but Janet will do anything to keep him safe. She'll need a little help from her friends, old and new: Nash and Coyote; Cassandra, a powerful witch turned hotel manager; and Colby a sort-of-trustworthy dragon. But now a new, dark power is stirring in Magellan that Janet must face, but even more frightening, one is stirring within herself.

I hadn’t realized how much I missed Janet and Mick until I decided to pick up ‘Firewalker’, the 2nd in Allyson James’ Stormwalker Series.

Firewalker opens with Janet managing her hotel, without Mick; he’s been missing for a few weeks with no word. Shortly afterwards a shifter informs Janet that she discovered where Mick is and Janet leaves immediately to help him; taking Nash with her. Together they are able to break Mick free of the magic prison that the dragons placed on him; however, as they are leaving they are attacked by demons and the new dark power growing with Janet is released and they are saved… but Janet is having more and more difficulty controlling it.

A corpse is found near Janet’s hotel and she immediately becomes a suspect. The revelation of what happened, who did it, etc… gasp! Be prepared. Lol I can’t wait to be able to get my hands on the 3rd in this series.