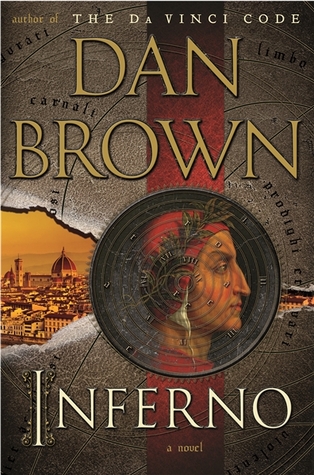 In his international blockbusters The Da Vinci Code, Angels & Demons, and The Lost Symbol, Dan Brown masterfully fused history, art, codes, and symbols. In this riveting new thriller, Brown returns to his element and has crafted his highest-stakes novel to date.

In the heart of Italy, Harvard professor of symbology, Robert Langdon, is drawn into a harrowing world centered on one of history's most enduring and mysterious literary masterpieces...Dante's Inferno.

Against this backdrop, Langdon battles a chilling adversary and grapples with an ingenious riddle that pulls him into a landscape of classic art, secret passageways, and futuristic science. Drawing from Dante's dark epic poem, Langdon races to find answers and decide whom to trust...before the world is irrevocably altered.

Fans of this series have been waiting 4 years for the next installment. Yes, The Lost Symbol came out in 2009. Unfortunately, this does not read like he spent the full 4 years invested in making sure this was a masterpiece (he actually claims in an interview he spent 3 years researching this novel. *cough*bullshit*cough*). Inferno consists of a horribly muddled and dramatic plot, twists in the story that don’t even make sense and a whole slew of sections straight out of an encyclopedia.

This Dante tale is anything but Divine (but is a bit of a comedy) – pun intended. Now, don’t get me wrong. I am a fan. I know most people shun his works but I am admittedly a big fan of The Da Vinci Code. Looking back I can’t say for sure if I would still enjoy the novel today considering I read it ages ago and I’ve become much more of a critical reader, but I do keep picking up these books for some reason or another.

The main issue with Inferno is the fact that this book could easily be half in length if there wasn’t so much unnecessary detailing. He describes where they are in such vivid detail but it isn’t always relevant. With Angels & Demons and The Da Vinci Code, the descriptions were useful in finding their next clue, where they needed to go next to obtain the next piece of the puzzle. While the descriptions are interesting it detracts from the actual story and makes Langdon appear to be some crazed tour-guide while he’s supposed to be in the middle of running for his life. The overall smugness he has bestowed upon Robert Langdon is obnoxious and disrupting.

“…although as an architecture enthusiast, he found it almost unthinkable to rush a trip along the Grand Canal.”

DUDE. PEOPLE ARE TRYING TO KILL YOU. YOU’RE A FUCKING MORON. Yet despite his constant admiring of statuary and architecture he is constantly able to evade capture and certain death. DUN DUN DUN

The second issue was the strange, short chapters. They were always ended on some dramatic discovery that induced more eye-rolling than gasps of shock. The choice of position in breaks made it more melodramatic and annoying than a respite from the intensity of the story. And speaking of melodramatic and annoying, this book possesses one of the most absurd and histrionic endings I have ever had the misfortune of reading. I believe Mr. Brown had an intriguing concept for a story line, but he may have bit off more than he could chew because the execution of this story was truly abysmal.

I could write a full review based on what I like to consider the ‘lines-of-ridiculousness’. While I’ll spare you the majority of them, I couldn’t resist including a few. (I refuse to suffer alone.)

‘Normally, Langdon’s visits to the Palazzo Vecchio had begun here on the Piazza della Signoria, which, despite its overabundance of phalluses, had always been one of his favorite plazas in all of Europe.’

‘The statute before them depicted an obese, naked dwark straddling a giant turtle. The dwarf’s testicles were squashed against the turtle’s shell, and the turtle’s mouth was dribbling water, as if he were ill.’

And I’ll leave you with this fabulous Fifty Shades quip. Yes. You heard me right.

So why is this #1 on the NYT bestseller’s list? Well, his past works while not of superior literary quality were still enjoyable enough so I’m assuming people just expected more (and expected him to maybe advance as a writer?) And of course, with the digs taken against the Vatican I’m sure it’s only a matter of time until they decide to ban this one too and spur even more sales.

I will occasionally recommend a particular drink that fits well with the book. In this case? I recommend ALL THE DRINKS. You’ll need them to get through this ridiculous disaster of a book.

Waiting on Wednesday – The Gone Dead: A Novel by Chanelle Benz