Also by this author: NOS4A2, Twittering from the Circus of the Dead, The Fireman: A Novel

“Snapshot” is the disturbing story of a Silicon Valley adolescent who finds himself threatened by “The Phoenician,” a tattooed thug who possesses a Polaroid Instant Camera that erases memories, snap by snap.
A young man takes to the skies to experience his first parachute jump. . . and winds up a castaway on an impossibly solid cloud, a Prospero’s island of roiling vapor that seems animated by a mind of its own in “Aloft.”
On a seemingly ordinary day in Boulder, Colorado, the clouds open up in a downpour of nails—splinters of bright crystal that shred the skin of anyone not safely under cover. “Rain” explores this escalating apocalyptic event, as the deluge of nails spreads out across the country and around the world.
In “Loaded,” a mall security guard in a coastal Florida town courageously stops a mass shooting and becomes a hero to the modern gun rights movement. But under the glare of the spotlights, his story begins to unravel, taking his sanity with it. When an out-of-control summer blaze approaches the town, he will reach for the gun again and embark on one last day of reckoning.

Joe Hill's debut, Heart-Shaped Box, won the Bram Stoker Award for Best First Novel. His second, Horns, was made into a film freakfest starring Daniel Radcliffe. His other novels include NOS4A2, and his #1 New York Times Best-Seller, The Fireman... which was also the winner of a 2016 Goodreads Choice Award for Best Horror Novel.

He also writes short stories. Some of them were gathered together in his prize-winning collection, 20th Century Ghosts.

He was awarded the Eisner Award for Best Writer for his long running comic book series, Locke & Key, co-created with illustrator and art wizard Gabriel Rodriguez.

He lives in New Hampshire with a corgi named McMurtry after a certain beloved writer of cowboy tales. His next book, Strange Weather, a collection of novellas, is due in fall of 2017.

I’m a mega fan of Joe Hill, sure, but not only does this compilation of stories sound incredible but that cover is all sorts of amazing too. Dying for this one. DYING. 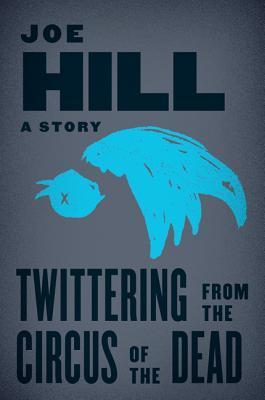