Acclaimed New York Times bestselling author Lynne Truss (Eats, Shoots & Leaves) is back with a mesmerizing and hilarious tale of cats and murder

For people who both love and hate cats comes the tale of Alec Charlesworth, a librarian who finds himself suddenly alone: he’s lost his job, his beloved wife has just died. Overcome by grief, he searches for clues about her disappearance in a file of interviews between a man called “Wiggy” and a cat, Roger. Who speaks to him.

It takes a while for Alec to realize he’s not gone mad from grief, that the cat is actually speaking to Wiggy… and that much of what we fear about cats is true. They do think they’re smarter than humans, for one thing. And, well, it seems they are! What’s more, they do have nine lives. Or at least this one does – Roger’s older than Methuselah, and his unblinking stare comes from the fact that he’s seen it all.

And he’s got a tale to tell, a tale of shocking local history and dark forces that may link not only the death of Alec’s wife, but also several other local deaths. But will the cat help Alec, or is he one of the dark forces?

In the deft and comedic hands of mega-bestseller Lynne Truss, the story is as entertaining as it is addictive” (The Sunday Telegraph) – an increasingly suspenseful and often hysterically funny adventure that will please cat lovers and haters alike. And afterwards, as one critic noted, “You may never look at a cat in quite the same way again” (The Daily Mail).

‘All of this story, remember, is based on the completely unacceptable and ludicrous premise of an evil talking cat called Roger that traveled romantically in the footsteps of Lord Byron in the 1930s and now solves cryptic crosswords torn out daily from the Telegraph.’

I’m all about dark humor (and if we’re being completely honest, anything involving cats) so when I read numerous reviews describing this novel as such, I jumped at the chance to read it. Sad to say, the ‘humor’ of this completely escaped me. Remember that horrible cheese-fest of a movie Cats & Dogs about a top secret war going on between, well, Cats & Dogs? The cats were all evil bastards trying to take over the world and man’s best friend was trying to foil their plans. So basically, just replace dogs with humans and you’ve got the plot of this story. 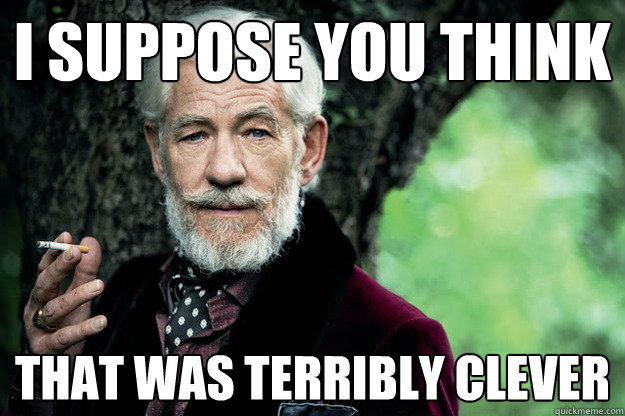 Our narrator, Alec, is a librarian who is mourning the sudden loss of his wife, Mary. Alec immerses himself in a collection of documents consisting of audio transcripts, e-mails, and photographs describing the story of a man called “Wiggy” who has just lost his sister. His story also includes the tale of a talking cat named Roger, a member of a satanic cult of immortal cats with a blood feud against humans. Roger begins to tell his life story to Wiggy, à la Interview with the Vampire.

‘”Why are cats so pissed off all the time? They get all the best seats in the house, they have food and warmth and affection. Everything is on their terms, not ours. They come and go as they please. Why aren’t they permanently ecstatic?” Well, now it’s explained. It’s because they’re conscious of having lost their ability to do serious evil, and they feel bloody humiliated.’

The included pop culture references with Roger having a voice like Vincent Price and is described as the feline equivalent of Stephen Fry (whatever that’s supposed to mean) and Alec’s dog Watson having a voice exactly like Daniel Craig, took this story even further into ridiculous territory. The fast-paced narrative, I had assumed was done in an attempt to recreate the sense of panic the characters were dealing with, came off as lazy and sloppy rather than thrilling and frenetic. But then we get to the end and we’re even told:

‘So that’s nearly the end, and I’d like to finish my account with an apology. Reading it all back, I realise that at times I have been a tad flippant in the way I have written this, and I have also told the story with what appears to be a lamentable lack of narrative organisation.’

So basically the author realized what a hot mess she just wrote and instead of going back and fixing it had her character apologize like it’s his fault. Well, whoever you want to blame, I still can’t accept it.

Maybe I took it all too seriously. Maybe I wouldn’t have if I would have known it was like LOLCats in novel form. And maybe there’s some hidden allegory I was supposed to uncover that would have allowed me the ‘a-ha!’ moment where it all makes sense. Unfortunately, that moment never came.