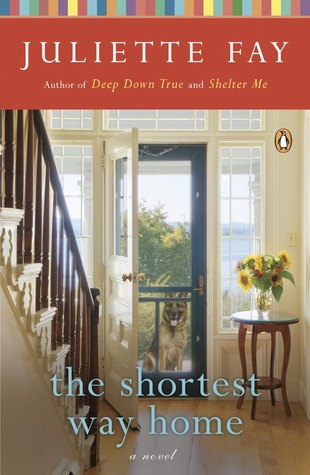 Sean has spent twenty years in Third World war zones and natural disaster areas, fully embracing what he’d always felt was his life’s mission. But when burnout sets in, Sean is reluctantly drawn home to Belham, Massachusetts, the setting of Fay’s much-loved Shelter Me. There, he discovers that his steely aunt, overly dramatic sister, and quirky nephew are having a little natural disaster of their own. When he reconnects with a woman from his past, Sean has to wonder if the bonds of love and loyalty might just rewrite his destiny. Completely relatable, The Shortest Way Home is another perfect serving of a slice of life from the irresistible Fay.

Juliette Fay's first novel, Shelter Me, was a 2009 Massachusetts Book Award "Book of the Year." Her second novel, Deep Down True, was short-listed for the Women's Fiction award by the American Library Association. Juliette received a bachelor's degree from Boston College and a master's degree from Harvard University. She lives in Massachusetts with her husband and four children. The Shortest Way Home is her third novel.

A Book in The Drawer . . . Right Where It Should Be
By Juliette Fay,
Author of The Shortest Way Home

I have a book in the drawer. Okay, it’s not in an actual drawer. It’s in a box with old tax documentation under my fax/scanner. I also have electronic copies stashed in several places. Not that it matters. It will never see the light of day.

The Book in the Drawer is a phrase I’ve heard often from other authors, nearly proverbial in its usage. It’s the practice novel, the one that never got published. If a fiction-writers bible were ever to be written, the psalms might include the following lamentation:

Oh, Lord, have mercy on my wretchedness.
I have been cast out into the wilderness of time wastage.
I have put my pen to many a parchment,
Pages that speak from the depths of my soul,
And yet my toil has been for naught!
Alas, my Book is in The Drawer.

I wrote my drawer novel out of aggravation. I had just read a remarkably bad book. The only thing I liked about it was the premise: two people trapped in an elevator. (She was beautiful, he was handsome. Of course. Yawn.) I found myself wondering, What would I do with that for a starting point? Who would I put in that elevator?

I decided that the man had just come from a family barbecue at which his siblings had skewered him for being selfish. The woman was a recovering alcoholic with an unmedicated anxiety disorder. The elevator got stuck between floors during a power outage, and the woman had a panic attack and peed her pants.

I called it The Hyperventilating Pants-Wetter Society. It took me a year to write. In the end, the best thing about it was the title, which I still really love.

And it almost got published! I had an agent and everything. (He completely ignored me then shunted me off to some 24-year-old “associate” who clearly hated me and my book. After a couple of painful months they decided it was unpublishable, notifying me by registered letter. I am not making this up. Seriously, they couldn’t have picked up the phone?)

I was in a state of ocean-floor level misery until I remembered how much I truly loathed and was slightly afraid of the both of them. Also, in the year that I had been trying desperately to get an agent, then waiting for them to find a publisher, I had written another novel, Shelter Me, and I knew it was better than The Hyperventilating Pants-Wetter Society, except for the title, which, let’s face it, is hard to beat.

Shelter Me was soon repped by Theresa Park of The Park Literary Group, my second — and as far as I’m concerned, final — agent, whom I love. After she got Shelter Me sold to HarperCollins, I asked her to read The Hyperventilating Pants-Wetter Society. She was not enthusiastic — didn’t even think it could be fixed — so I left it in The Drawer (so to speak) and turned my efforts toward the new story I was working on which became Deep Down True.

There are three things I’m grateful for regarding The Hyperventilating Pants-Wetter Society:

1. That I completed it. Before that I truly had no idea if I could take a story from the bunch of stray thoughts to a full-length novel with a recognizable beginning, middle and end. It allowed me to put an official check mark next to something I’d always had on my bucket list: write a novel. Not write a bestseller or even get published. Just put the words on paper from start to finish.

2. That it’s in The Drawer. For a while I had a hard time with the fact that I’d spent an entire year writing something that would never see the light of day. After I finishedDeep Down True, I went back to see if I couldn’t — oh, how foolishly — prove my agent wrong by buffing it to a publishable state. I couldn’t. It was not good. And if it hadbeen published, I would be embarrassed by it now. It was a practice novel, pure and simple.

The third reason is a little surprising. My father read and loved The Hyperventilating Pants-Wetter Society when I first wrote it. Along with being an adoring and completely biased parent, he’s also a psychologist who often sees clients with phobias.

A couple of months ago, he was helping a client with incapacitating claustrophobia — especially in elevators. Her father was very ill and being treated on the twelfth floor of Massachusetts General Hospital. She desperately wanted to visit him, but not being in great health herself, she couldn’t walk up twelve floors. My father went with her to help her get through the elevator ride. As they waited on the ground floor, she became terribly anxious, and he thought she might not be able to visit her dad.
He later told me, “I wanted to distract her, so I started telling the story of The Hyperventilating Pants-Wetter Society. By the time the elevator came she was laughing, so I kept going. When we got to the twelfth floor she couldn’t believe the ride was over so fast.”

Thus, 3. That it helped someone. You could look at a book in a drawer as a year’s worth of work for nothing, and in some sense you’d be right. But when I remember that mine also helped an ailing man get a visit from his daughter, my frustration is reduced to almost nothing.

‘From the time he was fifteen Sean had known he would head out and do as much good as he could in the time that was left, while he waited for his mother’s diagnosis to become his own.’

Sean has known since an early age that he had a 50% chance he would develop the same disease that took his mother: Huntington’s disease. Not wanting to waste the life he had left he devoted his life to being selfless and helping others as a nurse in various foreign lands. Deciding that he needs a break because he’s getting burnt out from working so hard, he finally realizes that he’s old enough that he may have actually dodged a bullet and he doesn’t in fact have Huntington’s disease. He beat the odds. But this comes with the realization that he molded his life around the fact that he may very well not have many years to live and he begins to wonder just how different his life could have been if he had made different choices, if he had actually gotten tested and known for sure if he had the disease or not.

Sean returns home to visit his Aunt Vivian, sister Deidre, and his late brother Hugh’s son Kevin. He’s shocked to find that his Aunt Vivvy appears to have Alzheimer’s or early signs of dementia, Deidre is completely absorbed in making it big as an actor and is never home, and that eleven year old Kevin appears to be raising himself. Kevin is an extremely self-sufficient child and isn’t neglected; however, he finds his behavior to be strange until a friend mentions he exhibits signs of having a sensory processing disorder. Reluctant to alter his roaming lifestyle despite the obvious need for his presence to be closer to home, Sean still fully intends on leaving again once he’s been able to get everything straightened out.

There was a lot of detail given regarding Huntington’s disease and sensory processing disorders. Both diseases/disorders I knew very little about to begin with but it was extremely interesting to learn more about. It wasn’t overdone and didn’t venture off into medical jargon that didn’t make much sense, it was well explained and quite informative.

This is a hard book to put a label on. There were a few religious angles but they weren’t so abundant that I would label it a ‘Christian Fiction’ because there were also a couple of sex scenes. The bits of romance that were thrown in weren’t overdone and was nicely intertwined with the story but not so much I would label it a ‘Romance’ either. Definitely one for Adult Contemporary fans with a ‘deeper’ message. I found all of the characters to be quite charming which was a real treat. Once I passed the halfway point I was so absorbed into the story I couldn’t put it down. I suppose it could be said it was a predictable ending but I still raced to finish. Overall this was a surprisingly funny and lighthearted read despite the serious subject matter and I found myself laughing often.

Phew! This was a super long post with lots of scrolling required. Well, as a ‘congratulations you made it to the end’, here’s your opportunity to win a copy of this wonderful book!

Giveaway Details
1 copy of The Shortest Way Home open to U.S. and Canada addresses only!
Giveaway ends October 30th, 2012
To enter use the Rafflecopter form below. Remember to come back for more entry opportunities daily!!