Also by this author: Shadow on the Crown

Menaced by Vikings and enemies at court, Queen Emma defends her children and her crown in a riveting medieval adventure

Readers first met Emma of Normandy in Patricia Bracewell’s gripping debut novel, Shadow on the Crown. Unwillingly thrust into marriage to England’s King Æthelred, Emma has given the king a son and heir, but theirs has never been a happy marriage. In The Price of Blood, Bracewell returns to 1006 when a beleaguered Æthelred, still haunted by his brother’s ghost, governs with an iron fist and a royal policy that embraces murder.

As tensions escalate and enmities solidify, Emma forges alliances to protect her young son from ambitious men—even from the man she loves. In the north there is treachery brewing, and when Viking armies ravage England, loyalties are shattered and no one is safe from the sword.
Rich with intrigue, compelling personalities, and fascinating detail about a little-known period in history,The Price of Blood will captivate fans of both historical fiction and fantasy novels such as George R. R. Martin’s Game of Thrones series.

The Emma of Normandy Trilogy

Patricia Bracewell grew up in Los Angeles where her love of stories led to college degrees in Literature, a career as a high school English teacher, and a yearning to write. A lifelong fascination with the history of Britain and a chance, on-line reference to an unfamiliar English queen led to years of research, a summer course in Anglo-Saxon history at Cambridge University, and the penning of her debut novel Shadow on the Crown. The book was hailed as a magnificent work of historical fiction by England’s Daily Mail and an enthralling debut by Publishers Weekly.

Patricia lives with her husband in Oakland where she is completing the second book in her trilogy about the extraordinary queen, Emma of Normandy.

Shadow on the Crown was superb and definitely one of my favorite reads of 2013. I was so pleased to hear Emma’s story would be continuing. This cover is phenomenal and I cannot wait to get my hands on this.

I received this book free from Edelweiss, Library in exchange for an honest review. This does not affect my opinion of the book or the content of my review. 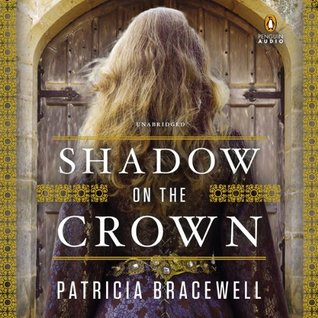 In 1002, fifteen­-year-old Emma of Normandy crosses the Narrow Sea to wed the much older King Athelred of England, whom she meets for the first time at the church door. Thrust into an unfamiliar and treacherous court, with a husband who mistrusts her, stepsons who resent her and a bewitching rival who covets her crown, Emma must defend herself against her enemies and secure her status as queen by bearing a son.

Determined to outmaneuver her adversaries, Emma forges alliances with influential men at court and wins the affection of the English people. But her growing love for a man who is not her husband and the imminent threat of a Viking invasion jeopardize both her crown and her life.

Based on real events recorded in the Anglo-Saxon Chronicle, Shadow on the Crown introduces readers to a fascinating, overlooked period of history and an unforgettable heroine whose quest to find her place in the world will resonate with modern readers.

“You must ever be prepared within yourself to face what trials may lay in store for you. let this be your first lesson: No one else must see you like this, Emma. Do you hear me? However great the provocation you must never allow anyone to see your fear.”

I’m a huge fan of historical fiction novels but to be honest, I don’t branch out enough outside of my comfortable safe-zone known as the Tudor time period. This one caught my eye primarily because it is still set in England, however, it’s in a very, very early England. After this one, I do believe I have learned my lesson and I need to take more chances with my historical fiction picks. Shadow on the Crown was superbly done.

‘Their destinies were like two rivers that flowed ever in the same direction, within sight of each other but never meant to meet, to touch, to join as one.’

What worked incredibly well was the evidence of research that was done in preparation for this novel. The author has stated that Shadow on the Crown is based on real events recorded in the Anglo-Saxon Chronicle, but it’s evident the author has the ability to take pieces of history and create a truly stirring story. Also, I really appreciated her interpretation of the romances. In most historical fiction novels the romances are portrayed similarly to a historical romance (bodice ripper) and just comes off as corny rather than genuine.

Each character was given their own unique voice and even though they were not a main character their bits in the story still shown. Emma was an amazingly strong character and it was a joy to read (the majority of) this story through her eyes. The POV does occasionally switch up but is not overdone and provides additional and necessary facets of this story.

What truly blows me away about this novel is that it’s a debut novel. The few historical fiction debut novels I’ve read in the past have all read like the author is re-wording their history books. Patricia Bracewell managed to re-tell a piece of history and imbue something vibrant into it. It’s quite obvious that the author is passionate about history and this time period in general but her passion is addicting and made it a true joy to read. Shadow on the Crown does not tell all of Emma’s story so I’m very much looking forward to future books.