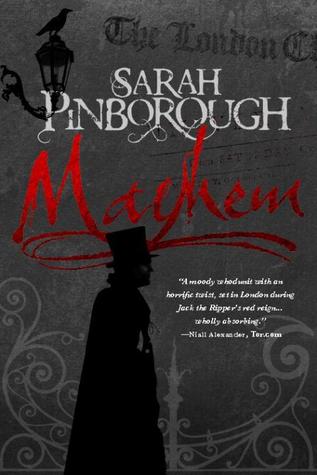 “A compulsively readable story that starts as a conventional murder mystery and morphs, by degrees, into a horrifying supernatural thriller,” The Guardian said of Mayhem.

A virtuoso fantasy writer, Sarah Pinborough has won numerous awards including the British Fantasy Award for Best Short Story. In Mayhem Pinborough turns her attention to one of the most baffling and notorious crime sprees in Victorian times. A new killer that newspapers have dubbed “The Torso Killer” is terrorizing the streets of London’s East End, his crimes obscured and overshadowed by the hysteria surrounding Jack the Ripper’s Whitechapel crimes. The victims are women too, but their dismembered bodies, wrapped in rags and tied up with string, are pulled out of the Thames–and the heads are missing. The murderer likes to keep them. Mayhem is a masterwork of narrative suspense: a supernatural thriller set in a shadowy, gaslit London, where killers stalk the cobbled streets and hide in plain sight.

I’m a huge fan of mysteries and I have an interest in Jack the Ripper type stories so this is a total win for me. Haven’t ever read anything from this author before but I’ve heard her other series, The Dog-Faced Gods, is super good so I may need to look into that too.
Have you read Sarah Pinborough’s The Dog-Faced Gods series? What did you think?
What are you waiting on this Wednesday?