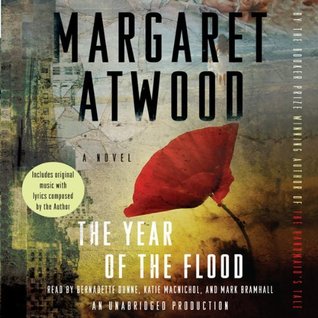 Also by this author: Oryx and Crake, MaddAddam, The Handmaid's Tale

Set in the visionary future of Atwood’s acclaimed Oryx and Crake, The Year of the Flood is at once a moving tale of lasting friendship and a landmark work of speculative fiction. In this second book of the MaddAddam trilogy, the long-feared waterless flood has occurred, altering Earth as we know it and obliterating most human life. Among the survivors are Ren, a young trapeze dancer locked inside the high-end sex club Scales and Tails, and Toby, who is barricaded inside a luxurious spa. Amid shadowy, corrupt ruling powers and new, gene-spliced life forms, Ren and Toby will have to decide on their next move, but they can't stay locked away. Oryx and Crake (MaddAddam Trilogy #1) by Margaret Atwood {My Review}

“What am I living for and what am I dying for are the same question.”

The Year of the Flood is a companion novel to Oryx and Crake (however O&C fills in much of the necessary back story so make sure not to skip it).

The discussion (or argument) continues with The Year of the Flood regarding the ability to alter humans in order to achieve perfection and whether it’s an ability that should be used. This time, we get to see the world through the eyes of Gods Gardner’s (and also those of whom live in the pleeblands). The God’s Gardner’s are an extremely eco-conscious group of people that have been prophesying for years of the ‘Waterless Flood’ that is impending. Because these people have anticipated this event for so long they’re more prepared than anyone else, or at least the ones that survived the initial pandemic are. This group of people has created their own ideology which melds science and nature into the fabric of religion and was really quite fascinating. The most fascinating aspect of Oryx and Crake was learning about the pandemic and how it came to be but with The Year of the Flood it was the focus on this extremely adaptive group and how they managed to survive in a world where no one else could.

The highly creative world Atwood has created is not without flaws. It is imperfect and blemished, however for me that was what appealed the most. I expect if we ever find ourselves in a dystopian/post-apocalyptic world it would be much the same lacking a perfectly wrapped up ending. Atwood has been clear to designate this trilogy as “speculative fiction” and not “science fiction”. Science fiction tends to be so outlandish that its very unlikely it will ever occur whereas speculative fiction may be outlandish at first glance yet its still dreadfully possible. That’s exactly what these stories exude: the actual possibility of these events transpiring. It’s what makes these books fantastic yet so terribly frightening.