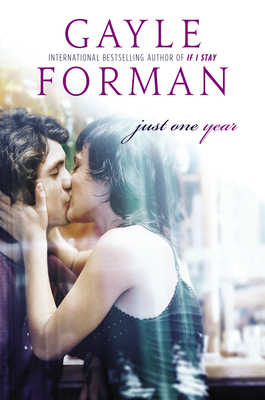 Also by this author: Just One Day, Just One Night

After spending an amazing day and night together in Paris, Just One Year is Willem’s story, picking up where Just One Day ended. His story of their year of quiet longing and near misses is a perfect counterpoint to Allyson’s own as Willem undergoes a transformative journey, questioning his path, finding love, and ultimately, redefining himself.

‘It was like she gave me her whole self, and somehow as a result, I gave her more of myself than I ever realized there was to give. But then she was gone. And only after I’d been filled up by her, by that day, did I understand how empty I really was.’

Finally. We have Willem’s story. Just One Day left readers contemplating what possibly could have gone wrong, why he never came back to Allyson and if they were ever going to be able to find each other again. Just One Year possesses the same melancholy feel as its predecessor with Willem stumbling around in an apparent daze, unable to trust the stability of his feelings for Allyson because after all… they only knew each other for a single day.

‘…it’s Lulu I miss, and I know it must be displaced, my loneliness a heat-seeking missile, her the heat. Only I can’t seem to find a new source of heat.’

This is a tough one for me to figure out how I feel about. Willem was a tough nut to crack and I went through the majority of the book not feeling any sort of compassion towards him, no pity for his plight, when I think that would have been the regular response. He gave up his search for her very early on and considering we already know what Allyson went through physically and emotionally makes me sad for her. Willem was convinced to start looking for her again by friends and as much as he kept saying he was still looking for her that whole time, it wasn’t an active search. It felt like he was simply sitting back and waiting for something to happen, for her to find him.

‘The truth and its opposite are flip sides of the same coin.’

Willem’s story became less about their romance and more about him discovering things about himself and becoming a better person because he met her. This is actually what I had originally hoped for her in Just One Day; for Allyson to recognize the incredibly transformed person she had become (and she did) but that even though it resulted from her meeting Willem that she didn’t need him to continue to be as such. Willem found the independence and strength their meeting imbued and used it in a positive manner and while I’m glad at least one of them did this, I never quite liked Willem enough in order to root for him. I never saw what appealed to Allyson and I never understood quite why they transformed each others lives in the first place.

While I’m glad to have the closure of Willem’s side of the story, I still can’t help but feel the ending would have benefited from… more. I needed to see Willem and Allyson’s transformations being applied since we as readers were only afforded a quick glance before reaching the final page.

Just One Year is a tale of transformation, of finding happiness, of finding love and finding yourself.