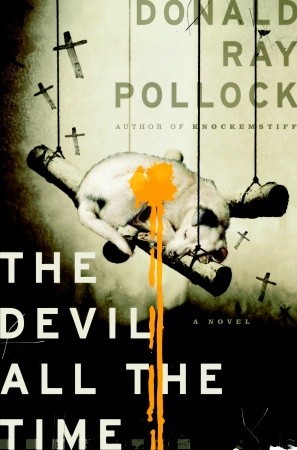 Also by this author: The Heavenly Table

In The Devil All the Time, Donald Ray Pollock has written a novel that marries the twisted intensity of Oliver Stone’s Natural Born Killers with the religious and Gothic over­tones of Flannery O’Connor at her most haunting.

Set in rural southern Ohio and West Virginia, The Devil All the Time follows a cast of compelling and bizarre characters from the end of World War II to the 1960s. There’s Willard Russell, tormented veteran of the carnage in the South Pacific, who can’t save his beautiful wife, Charlotte, from an agonizing death by cancer no matter how much sacrifi­cial blood he pours on his “prayer log.” There’s Carl and Sandy Henderson, a husband-and-wife team of serial kill­ers, who troll America’s highways searching for suitable models to photograph and exterminate. There’s the spider-handling preacher Roy and his crippled virtuoso-guitar-playing sidekick, Theodore, running from the law. And caught in the middle of all this is Arvin Eugene Russell, Willard and Charlotte’s orphaned son, who grows up to be a good but also violent man in his own right.

Donald Ray Pollock braids his plotlines into a taut narrative that will leave readers astonished and deeply moved. With his first novel, he proves himself a master storyteller in the grittiest and most uncompromising American grain.

“…rich people did fine and dandy as long as things were going their way, but the minute the shit hit the fan, they fell apart like paper dolls left out in the rain.”

The Devil All the Time spans decades and showcases several unforgettable individuals. We’re first introduced to Willard Russell, an extremely religious man who sacrifices animals to his ‘prayer log’ in hopes that it will keep the cancer from taking his wife. His son, Arvin, is irrevocably changed by this period of his life. We’re also introduced to a preacher that believes he possesses the ability to bring people back to life, but when he kills and his ability abandons him he is forced to flee. And lastly is the couple that travel the country picking up hitchhikers, killing them brutally, and taking pictures as mementos.

The Devil All the Time is comprised of some of the most perverse characters I’ve likely ever read. Incredibly violent and brash in both characters and the story itself. There is suicide and rape and several brutal killings of both humans and animals but it somehow manages to not ever get to the point of gratuitous; rather, the actions of these individuals were conducted with a casualness and almost flippant manner that was fitting for them.

The desperation and overall mindset of these individuals in this small backwoods town (Knockemstiff, Ohio – which is actually a real town where Donald Ray Pollock himself grew up) was astounding. No one seemed to have big life plans, they all seemed to be extremely simple people. Except for the perverse ones.

‘…he pulled the trigger and a wad of wet, gray brains show out the other side of the college boy’s head. After he fell over, blood pooled in the sockets of his eyeballs like little lakes of fire…’

I’m not usually one for religious stories but these were tantalizing yet so shocking; my eyes were likely the size of dinner plates every time I was reading. It was quite like watching a train wreck, I couldn’t have torn my eyes away even if I tried (or wanted to). These seemingly unconnected story lines come together in a way that surely shocked the hell out of me. This was a completely enthralling story, I hope we can expect more from Mr. Pollock. Big thanks to Rory for the push to finally read this. Waiting on Wednesday – The Heavenly Table: A Novel by Donald Ray Pollock